Bohdan Dmytrovych Hawrylyshyn was born
in Koropets village of Ternopil region
on October 19, 1926

Was displaced to Germany for compulsory work,
acquired his secondary education in a refugee camp

Departed to Canada and worked
there as a lumberjack in Manitoba

Got married to Leonida Hawrylyshyn.
The couple has three children: two daughters
and son and seven grandchildren.

1988 – initiated the creation of the International Management Institute in Kyiv (IMI-Kyiv)
1991 – founded and headed Consultative and Advisory Council under the Presidium of Verkhovna Rada of Ukraine, which was effective for the next 7 years

2009 – Bohdan Hawrylyshyn Foundation was established
2012 – launched the “Young Generation Will Change Ukraine” Pogram within Foundation, which today accounts over 500 participants 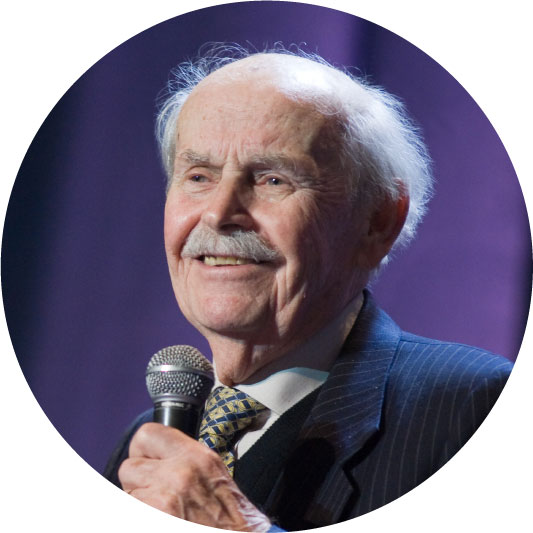 Bohdan Hawrylysyn was born on October 19, 1926, in Koropets village, Ternopil Oblast (at that time part of Poland). In 1930 his father bought 10 hectars of land between the town of Buchach and Zhyznomyr village, and built a house there. Bohdan Hawrylyshyn spent most of his childhood on his father’s farm.

For three years he has been studying at the elementary school in Zhyznomyr, later – at the Polish gymnasium in Buchach (1936-1938) which was made a secondary school during the bolshevik regime. From September 1941 he studied at Chortkiv Gymnasium, then in 1943-1944 at Drohobych Gymnasium.

During the World War II in 1944, he was captured by the Nazis and displaced to Germany. After the war, he spent almost two years in a displaced persons camp, and afterwards moved to Canada as a lumberjack.

Since 1988 Dr. Hawrylyshyn has committed his activity to Ukraine and worked there on the voluntary basis. After Ukraine gained its independence in 1991, he acted as an advisor to the First President of Ukraine, several Premier-Ministers and Chairmen of Verkhovna Rada (Parliament of Ukraine).

More than 30 years of his professional career Dr Hawrylyshyn devoted to the educational sphere. Since 1960 he has been supervising training programs at IMI Geneva (now International Institute for Management Development), teaching economics, global business environment, international operations management and public administration. In 1968 Bohdan Hawrylyshyn became the Director of the institute and remained its head for eighteen years.

In 1989 he initiated the establishment of the International Management Institute (MIM-Kyiv) by the Academy of Sciences of Ukraine and IMI-Geneva. It was the first institution in the former USSR which provided MBA program training.

Bohdan Hawrylyshyn was a full member of the Club of Rome, a cofounder of the European Management Forum in Davos, a fellow and member of the Board of the World Academy of Art and Science. As an expert on issues of public administration and international business and cross-cultural relations, he has been a contributor, moderator and chairperson at international conferences and seminars in over 88 countries.

Hawrylyshyn was also an active member of the Lisovi Chorty fraternity within the Plast Ukrainian Scouting Organization. From 2006 to 2008 Bohdan Hawrylyshyn was a Chairman of the Board of Plast.

In 2010 Dr. Hawrylyshyn founded Bohdan Hawrylyshyn Charitable Foundation, aimed to encourage and promote new generation of professional, patriotic and correct Ukrainians who care about common values and goods, who are proactive in social and political life of the country and who can peform its transformation.

Professor Hawrylyshyn was one of the members of December 1st Initiative Group.

Bohdan Hawrylysyn died on October 24, 2016 at the age of 90 surrounded by his family in his flat in Kyiv, Ukraine. Ashes buried in the cemetery in his native village Koropets.

Buy More
Identity in a Globalized World. The Story of My Life

Identity in a Globalized World. The Story of My Life

Towards More Effective Societies. Road Maps to the Future