After the Revolution of Dignity, Ukrainian youth received a voice at the highest level of diplomacy. The program of Ukrainian Youth Delegate to the United Nations was established in 2014 by the Bohdan Hawrylyshyn Foundation. For six years in a row, two young people have been representing our country at the United Nations General Assembly. This year, that role was awarded to Nargis Mokhd from Odesa and Roman Tymotsko from Lviv. 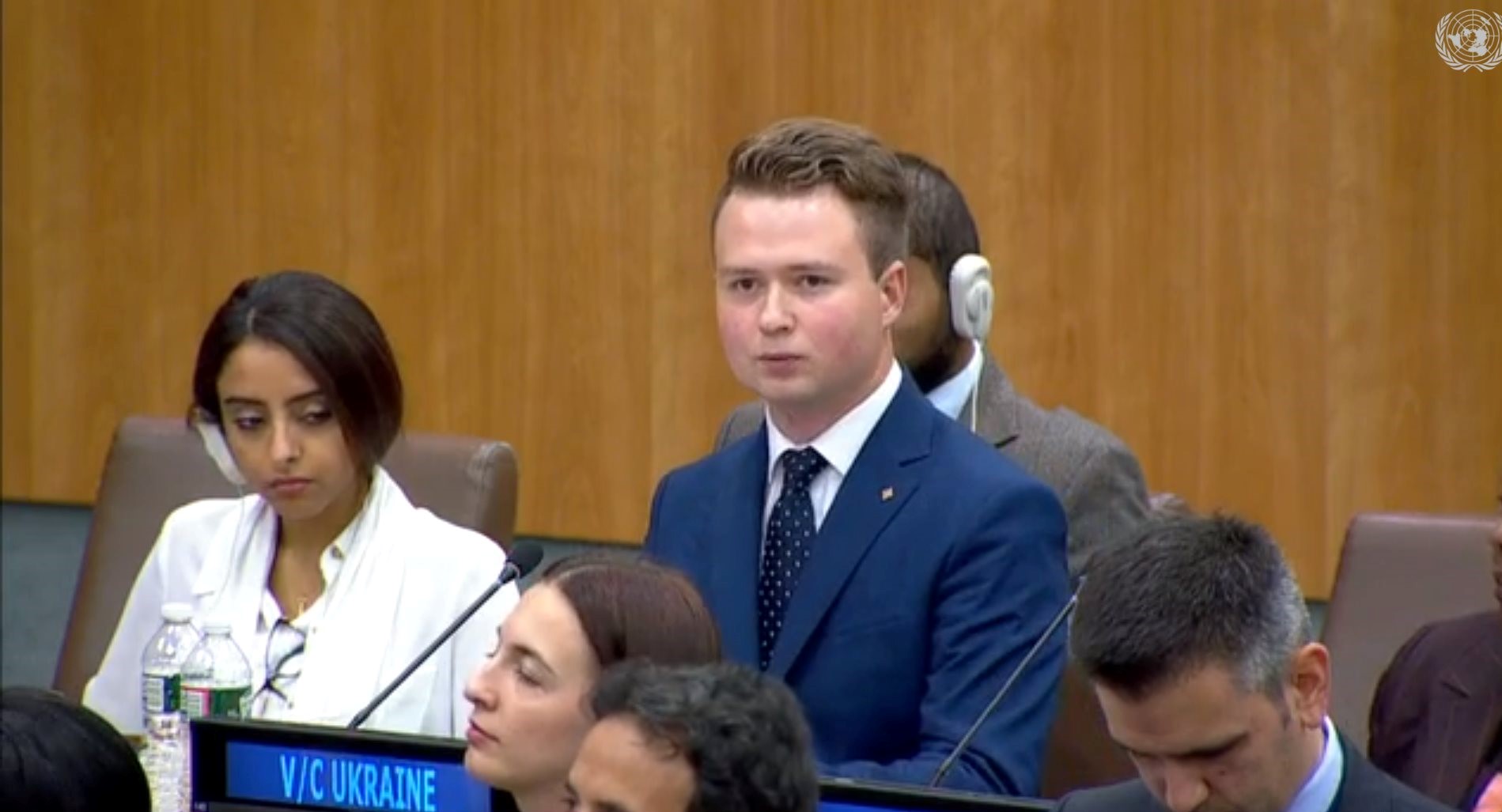 Roman Tymotsko during his U.N. speech 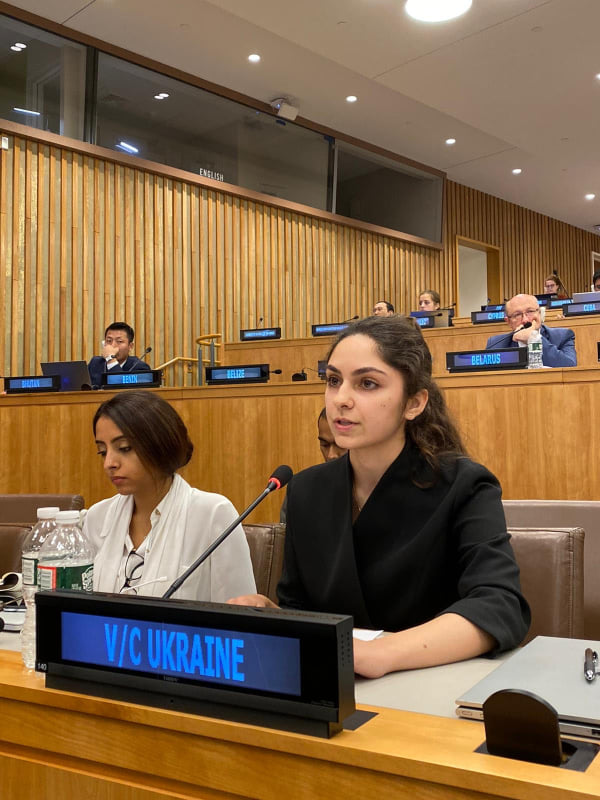 Nargis Mokhd delivers her speech at the U.N.

The text below was written by Roman Tymotsko for ukrweekly.com:

We have since returned to Ukraine, and now we can look back at this life-changing experience in New York.

Youth delegates have a one-year mandate, which includes participation in the United Nations General Assembly, an information campaign about their experience and Sustainable Development Goals in Ukraine, involvement in other international events by their choice, and leading a project focused on solving one of youths’ problems.

Ms. Mokhd and I were chosen among around 100 applicants. The application itself is a complicated task: to enter the competition, you must film a video, write a motivational letter plus three essays on youth policy, youth organizations and Sustainable Development Goals, and prepare a CV. After the first round, the committee invites 15 participants to Kyiv for a face-to-face interview with representatives of the Ministry of Foreign Affairs, Ministry of Sports and Youth and the Bohdan Hawrylyshyn Family Foundation, as well as the previous youth delegates.

An “elevator pitch” and an interview help the committee choose five finalists, who then have 30 minutes to create a project and its presentation. The final round – the presentation and a Q & A session on the project – leads the last two contestants to the honor of being chosen as Ukraine’s youth delegates to the United Nations. 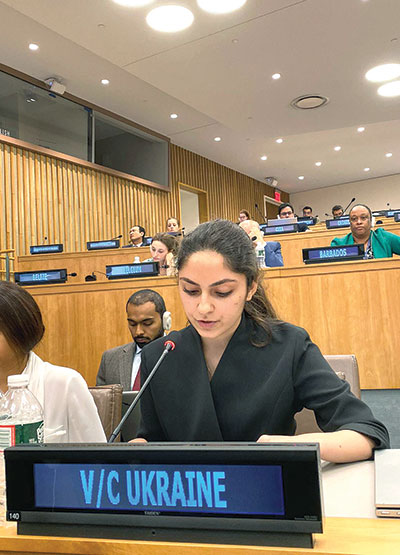 Before departing for New York, youth delegates research the youth sphere in Ukraine and initiate consultations with young leaders and experts in youth policies. One of the essential parts is a briefing at the Ministry of Foreign Affairs (MFA). High-level diplomats explained to us the main priorities of Ukraine’s foreign affairs and instructed us on our primary duties and relations with other delegations. At the United Nations, a lot of ties between countries are shaped by the way they voted for resolutions in the past. If a country supported Ukraine’s resolutions (for example, concerning Russian armed aggression), our relations are better than with those who did not.

Meeting with officials of the MFA immersed us in the role of youth delegates on a full scale. Our diplomats inspired us and gave a thorough understanding of this responsibility and our tasks as Ukraine’s representatives.

In New York City, youth delegates work closely with Ukraine’s Permanent Mission to the United Nations. During two weeks of activity at the General Assembly, we mostly help our diplomats in the work of GA’s Third Committee, which focuses on social, humanitarian and cultural issues. The General Assembly is an annual cycle, which starts with high-level meetings in September followed by work in committees.

We arrived in the U.S. right before the opening of the committee work. There is a lot of work to be done: analysis of each delegation’s position on different topics, translation of a variety of documents, and even being Ukraine’s only representatives in the conference hall with the responsibility to rapidly contact the Mission if someone mentions Ukraine in their speeches. The Mission highly supports the program of youth delegates and continually teaches us the skills needed in real day-to-day work at the United Nations.

The Youth Delegate Program is active in only 16 percent of the world’s countries. Most of them are European. Ukraine is among this small community of democratic governments who give this opportunity to their youth and allow them to represent the country on an official level. This is a privilege, considering all the risks young people can bring along with them to the United Nations. An even smaller circle of countries offers their youth delegates an opportunity to deliver a speech at the opening of the General Assembly’s Third Committee.

That speech was the quintessential experience of the entire Youth Delegate program thus far. Ms. Mokhd and I were given 90 seconds each to appeal to the entire international community.

In my speech, I told the story of 19-year-old Andriy Eyder, who was wounded last year in the Russian attack on the Ukrainian vessels near the Kerch Strait. The Russian navy seized three Ukrainian ships with 24 sailors on board while they were making the passage from one Ukrainian port to another through the strait. Mr. Eyder spent 286 days in a Russian prison and safely returned home at the beginning of September. The main message of my speech was that, “instead of contributing their talents to Ukraine’s success story and sustainable development, many Ukrainian young people sacrifice their life plans for the sake of our country’s security.” This was also a chance to once more remind the international community that for six years already Ukraine has been the only country in Europe that has been fighting against external aggression for its freedom and dignity, and the future.

When someone mentions another country during a speech at the General Assembly, the mentioned country has a right of response. I was “honored” by Russian attention – they could not leave my statement without an answer. The ranking diplomat from their delegation – the Russian Federation does not have a youth delegate – took advantage of the reply to spread propaganda, to state once more that the ongoing Russian war in Ukraine is a “civil conflict.” And the diplomat said that “it is a pity that Ukrainian officials use their youth delegates for their little games.” This statement showed Russian disdain to not only Ukrainian youth delegates but to the entire young delegate community represented at the United Nations.

Ironically, Russian diplomats helped us unite most of the youth delegates because of this disrespectful statement. In private conversations, youth delegates expressed solidarity in understanding which country is the real aggressor and who is spreading misinformation to cover their crimes.

Being in a community of many countries’ brightest young people led to my most significant insights. All of the delegates have their own unique backgrounds, education and beliefs they fight for. Two delegates from Germany were passionate about gender equality. A delegate from Ireland raised awareness of mental health issues. The Czech Republic’s delegate is an eco-activist. Romanian youth delegates followed and supported protests in their capital, Bucharest, during their stay in New York.

Also, there are different forms of programs and each has its own history: some countries have had youth delegates for decades, and some come to the United Nations for the first time. For most of us, this role is a volunteer position, but for an Australian delegate it is a full-time job. Furthermore, he has a team of 20 volunteers. Having more resources allows him to conduct highly productive preparations for the General Assembly; six months before traveling to New York, he met 11,000 young Australians on a tour through all regions of the continent.

Youth delegates from the European Union warmly included Ms. Mokhd and me in their community – sometimes, we feel like Ukraine is already a member of the EU. In the future, those young people will be the ones who decide on Ukraine’s Euro-integration. I hope that their optimism will stay with them for the next decade.

The only occasion when all of the youth delegates gathered together in one room was for a meeting with the United Nations Secretary-General António Guterres. He asked us about our experience at the U.N. and encouraged us to put more pressure on our governments to do more toward achieving Sustainable Development Goals (SDGs). Youth participation is vital for U.N. officials because the young generation is not involved enough in the policy-making process. And yet we are the ones who will live in the world created by current policy-makers. That’s the reason we need to take responsibility and act more on the local, national and global levels.

Once every two years, the General Assembly works on a Youth Resolution; some youth delegates are allowed to participate in negotiations on the resolution. At one of the meetings on this topic, we witnessed another follow-up of our speech. The Russian delegate proposed decreasing the role of youth delegates to the United Nations. He argued that some of the representatives use this opportunity to bring up political issues. For the next 20 minutes after this statement, most of the delegations spoke up on the importance of youth participation and voiced opposition to the Russian proposal.

During our two weeks in New York, Ms. Mokhd and I also took part in events with the Ukrainian diaspora. We attended Razom for Ukraine’s annual meeting. Razom is a community that “initiates short and long-term projects, or collaborates on existing projects with partner organizations, which help Ukraine stay on the path of fostering democracy and prosperity.” They are partners of the Bohdan Hawrylyshyn Family Foundation – the coordinators and sponsors of the Youth Delegate program.

We had an excellent time with Ukrainians in New York. I was inspired by understanding that people keep their Ukrainian identity and spend a lot of time to help Ukraine’s development.

I had similar reactions at Plast meetings. I am a member of Plast Ukrainian Scouting Organization for 11 years now, so it was a pleasure to meet kids in New Jersey and share with them my experience at the United Nations as well as tell them about Plast development in Ukraine. On top of that, I had the opportunity to be a speaker at the local School of Ukrainian Studies in New York City.

Almost each youth delegate conducts an event during his or her stay in New York. That means that Ms. Mokhd and I visited side events of our colleagues almost every day. Most of these events were discussions concerning some important youth-related topic. We also conducted an event aimed at finding new forms of cooperation among youth delegates in Europe. Perhaps this is the first step toward establishing a new youth community in Europe.

“These two weeks in New York were unforgettable,” Ms. Mokhd said. “The first thing that cannot leave one indifferent is the city itself, the dynamic New York. Here, people of different nationalities live shoulder to shoulder, and this is very familiar to me as a half-Afghan who grew up in a multicultural Odesa. Unity in diversity is our standard.”

“I would say that the U.N. is the leading global forum. However, it’s even hard to imagine how much work is being done in the Permanent Missions. I was impressed by Ukrainian diplomats. They do a great job, and they served as great mentors during our stay,” Ms. Mokhd shared. “The Ukrainian diaspora supported Roman and me a lot, too. We were hosted by Ukrainians living in New York and attended events organized by Razom for Ukraine. I got to know so many amazing, inspiring people driven by common ideas. I’m sure, we’ll build cooperation in further social projects.”

The mandate of a youth delegate from Ukraine is a chance to spread among young Ukrainians inspiration and belief in their ability to affect change. During the next 10 months, Ms. Mokhd and I will be spreading knowledge about the United Nations and its Sustainable Development Goals. But most importantly, we will be spreading optimism about the direction in which our world is heading, and the role designated for youth on this path.