For the third time the Bohdan Hawrylyshyn Family Foundation is organizing a panel discussion at the Ukraine House Davos on topics of responsibility.

The first panel took place in 2017 and was dedicated to #bh15 project based on Bohdan Hawrylyshyn’s Declaration of Human Responsibilities.
This year, the Foundation is focusing on young people who implement changes in Ukraine every day. Their stories and experience in the political, public, innovation and media fields can be an inspiration to others. All the panelists are participants or alumni of the Foundation’s programs started by Dr. Bohdan Hawrylyshyn. 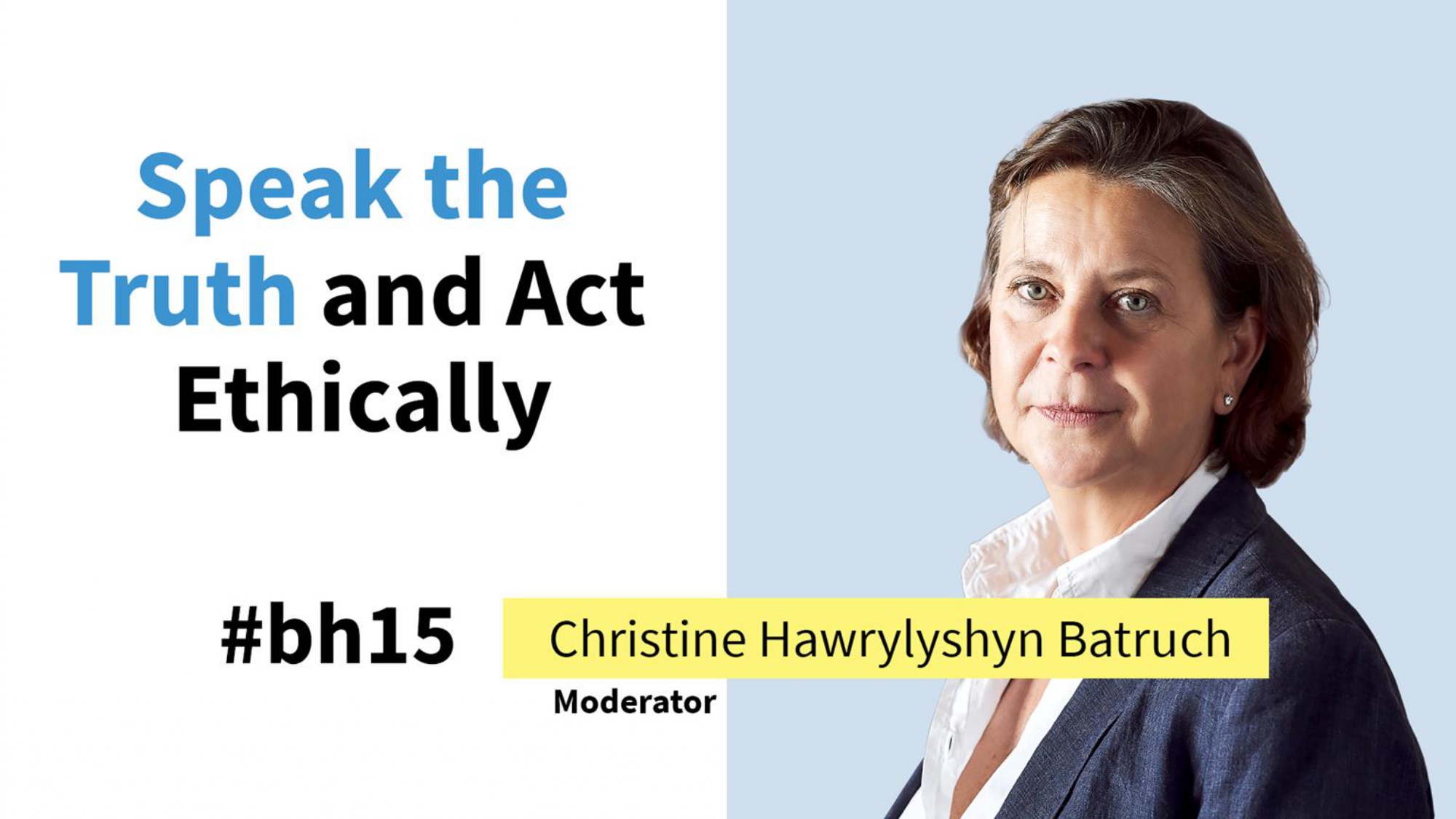 Ms Hawrylyshyn-Batruch is a daughter of Dr. Bohdan Hawrylyshyn. She is a citizen of Canada and Switzerland, is a historian and lawyer by training, graduate of the University of Toronto and McGill University respectively, admitted as barrister and solicitor at the Law Society of Upper Canada.

Based in Geneva, Ms Hawrylyshyn-Batruch has worked in the non-profit, academic and business sectors. She participated in the establishment in Ukraine of a number of non-profit institutions linked to the Soros network of foundations. Concurrently she was liaison officer and assistant professor at the International Academy of the Environment.  As VP Corporate Responsibility at Lundin Petroleum, which she joined in 2001, Ms Batruch was responsible for the company’s sustainability strategy. As of 2020, Ms Batruch acts as Senior Strategic Advisor to Lundin Petroleum and to the Lundin family. She acts as speaker in a number of international environmental, social and governance (ESG) conferences and has lectured on ESG issues at international business schools (IMD, IMI-Kyiv, Business School of Lausanne) and universities (Dundee, Geneva, Stockholm). Ms Hawrylyshyn-Batruch is President of the Bohdan Hawrylyshyn Family Foundation (Kyiv), member of the Board of Directors of Josemaria Resources Inc. (Vancouver) and of the Lundin Foundation (Vancouver) and member of the Advisory Board of the International Philanthropic Society (Stockholm). She is on the Editorial Board of the Journal of World Energy Law and Business (Oxford University Press) and of the Oil Gas and Energy Law Intelligence.

In 2014, Solomiia served as an adviser to the Vice Prime Minister of Ukraine, Olexander Sych. In 2016, at the age of 26, Solomiia headed the Odessa Regional State Administration, becoming the youngest head of the region in the history of Ukraine. In 2017, she was awarded with the Top-30 Under 30 Award according to Kyiv Post. She was awarded the medal of the Ukrainian Orthodox Church Kyiv Patriarchy “For Sacrifice and Love for Ukraine” (2015). Solomiia Bobrovska received her higher education at Ivan Franko Lviv National University (Master of Philosophy) where she is now writing a PhD. Trained in the Canadian Parliament and the Women’s Council of the Massachusetts State Administration (Boston, USA). Graduate of the Institute for Civil Leadership and the Canada-Ukraine Parliamentary Program. Solomiia Bobrovska is the co-founder of the public initiatives “Euromaidan SOS” and “Assistance to State Border Service of Ukraine”. Activist of the movement “Honestly. Filter the Rada (Parliament)!”. Currently, she is the head of the Ukrainian Base NGO, one of the areas of focus being the project of the Women’s Political Engagement Studies for women in southern and eastern Ukraine. Since 2002, she is a member of Plast (national scout organization), within which she founded a girls’ association at the national level; and since 2009, she is a member of the All-Ukrainian Youth NGO “Foundation of Regional Initiatives”. From June 2012 to June 2015, she is the curator and coordinator of the projects of the NGO “Center for Civil Liberties” in Kyiv. 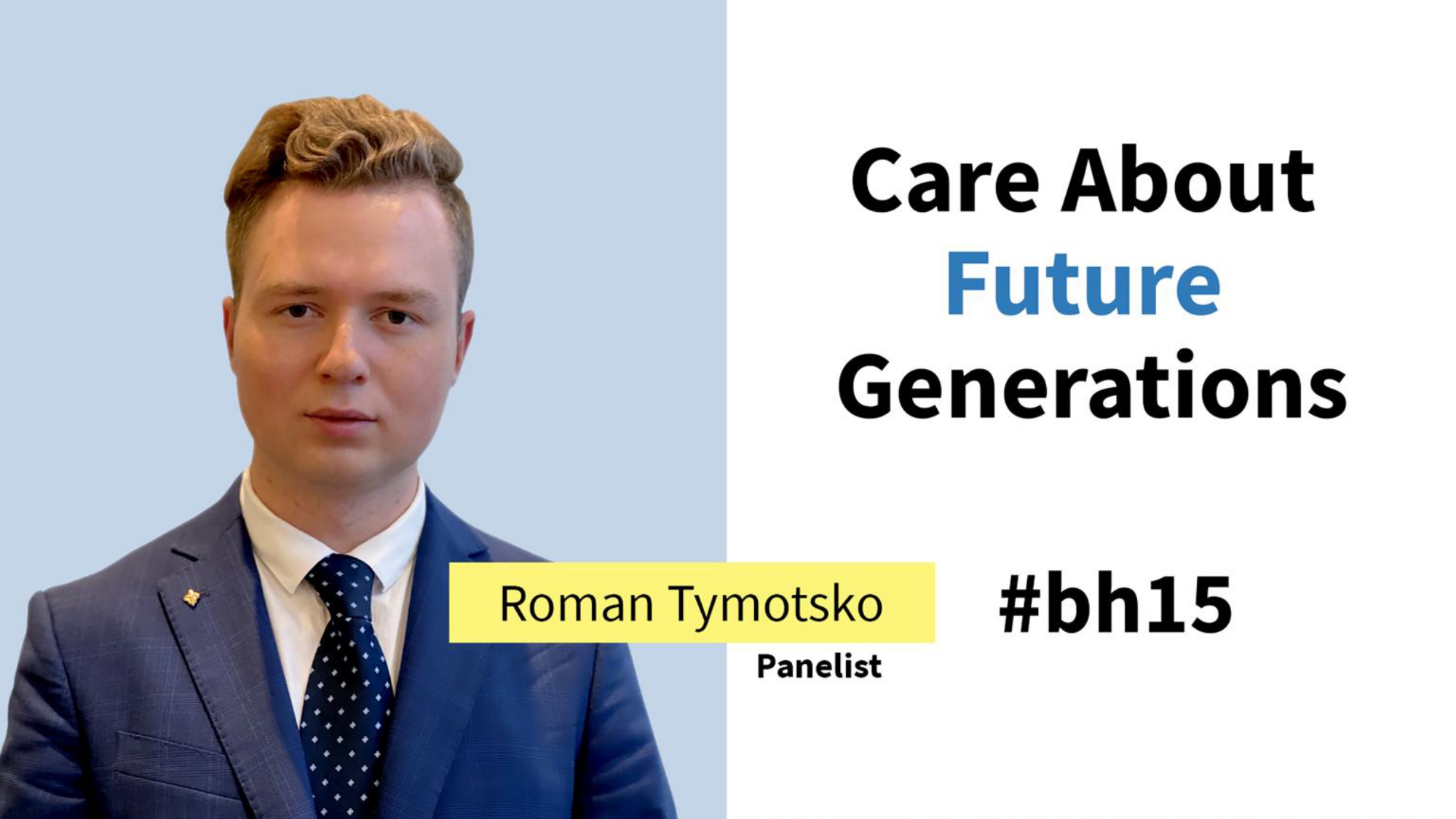 Ukrainian Youth Delegate to the United Nations 2019-2020. Has a degree in digital political journalism at the Taras Shevchenko National University of Kyiv. Since 2008 a member of Ukrainian National Scout Organization Plast —the largest and oldest youth organization in Ukraine.

Roman was a scout leader and organized dozens of camps, pieces of training, and other activities. For the last three years, he is working as National Communications Manager at Plast Central Office. With his team, he engaged 1500 new volunteers in Scouting and realized the record-setting crowdfunding campaign. Organization’s audience had doubled on Facebook and quadrupled on Instagram due to Roman’s persistence as a digital marketing expert. Now he studies management of nonprofit organizations at the Ukrainian Catholic University in Lviv. He is a part of the TEDxKyiv communications team and often consults NGOs and small businesses on digital marketing and communications. 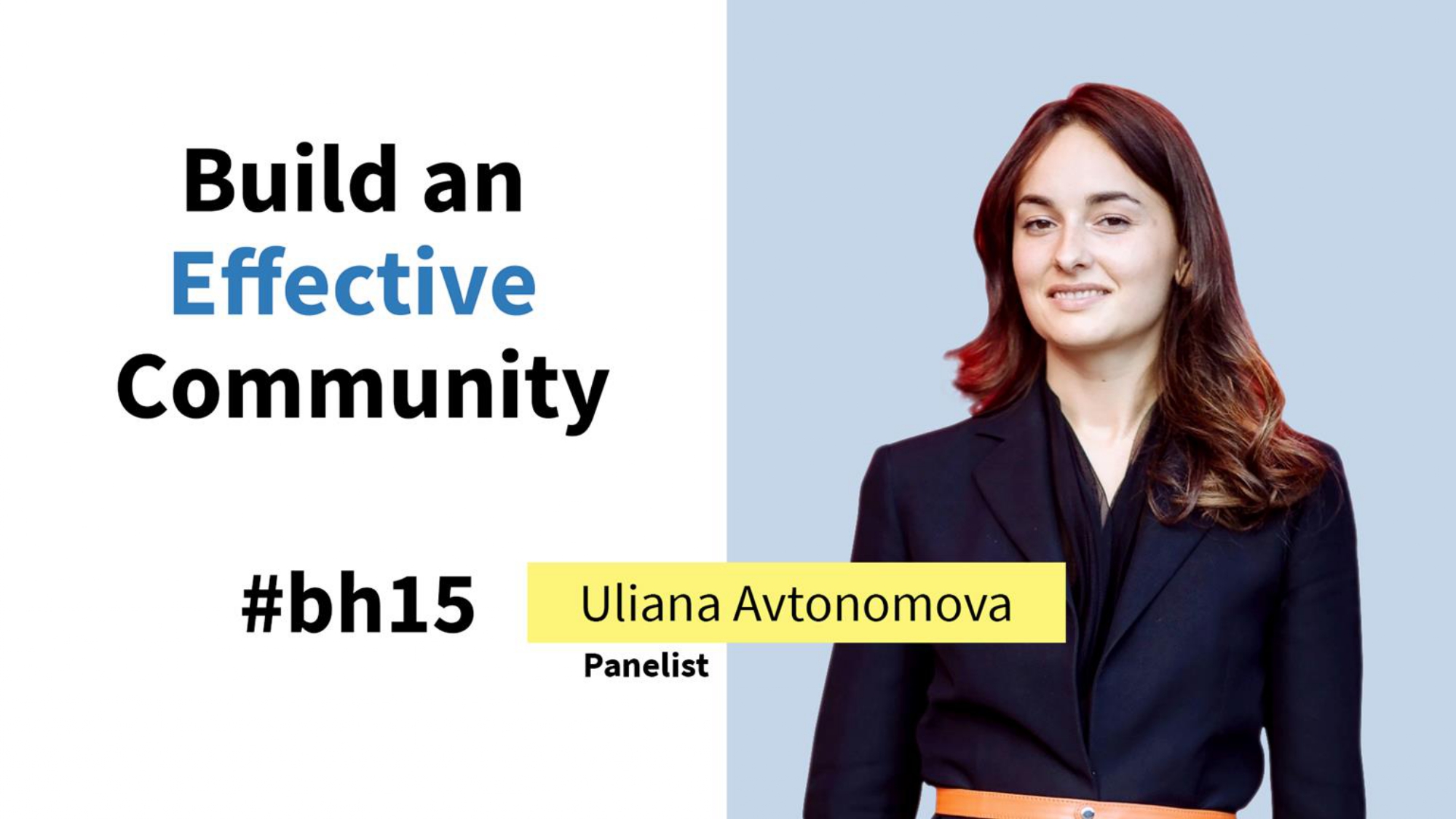 Uliana Avtonomova is a curator of EO Business Incubator in Kyiv supported by USAID Competitive Economy Program. She holds a Bachelor’s Degree in Philosophy from the Taras Shevchenko National University and Master’s Degree in Political Science. Previously she established an academy for virtual and augmented reality development at the innovation park UNIT.City. The latest course was funded by Ukrainian Culture Fund in partnership with three National Museums. Uliana also works as a consultant for Ferrexpo bringing innovations into the training process. Uliana is a member of the Global Shapers Community which is organized by the World Economic Forum. Ukrainian Youth Delegate to the United Nations, 2016/2017. A participant of the Young Generation Will Change Ukraine Program, 2015, organized by Bohdan Hawrylyshyn Family Charitable Foundation.

Taras Prokopyshyn, Co-Founder and CEO at The Ukrainians Media 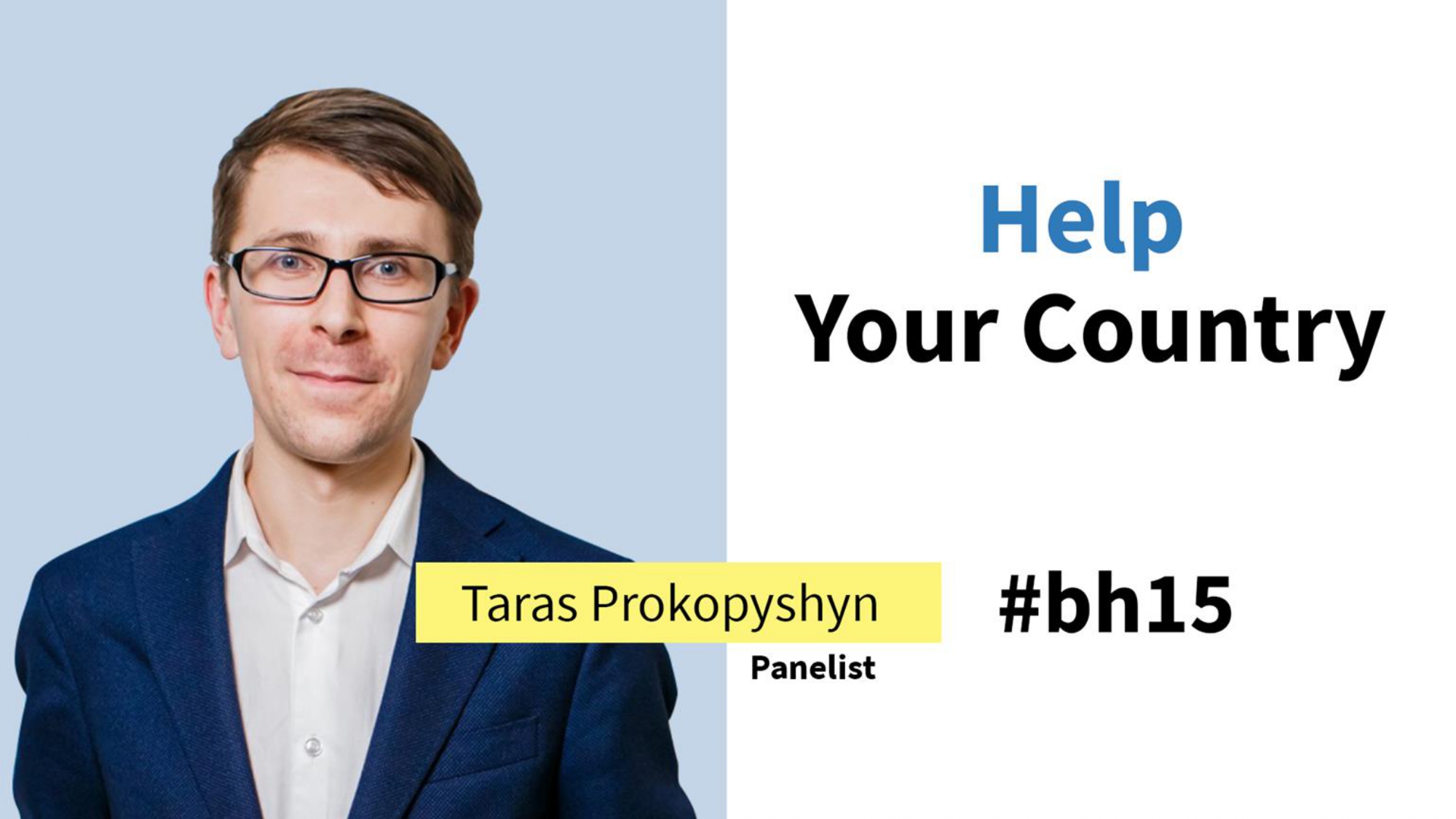 Ukrainian media manager and social activist. Co-Founder and CEO at The Ukrainians Media.

Taras Prokopyshyn was awarded as New Europe 100 Innovator (2015), listed at Ukraine’s Top 30 Under 30 from KyivPost — young Ukrainians under 30 who have the biggest influence on the country (2018) and was the finalist of George Gongadze Prize from PEN Ukraine — award for devotion to principles and values of independent journalism, professionalism and innovations in Ukrainian media (2019). Taras is ‘Young generation will Change Ukraine’ Program Alumni (2014).

Join the “Young Generation Changes Ukraine. The Stories of New Ukraine” discussion panel at the Ukraine House Davos.
Visit the event or watch live streaming online here on January 24, 2020, at 12.00 AM Kyiv time (11.00 AM Swiss time).